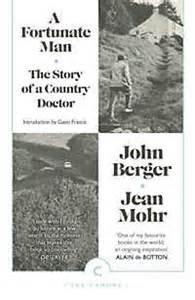 I've been meaning to read this book for a long time and its looks as though I'm going to finally get round to it. In many ways I think I can identify with the GP described. Yep I too have been a lucky man.

I was reminded of this when I saw a patient last week. She told me that there was something she needed to discuss and that there was no-one else that she could think of with whom she could talk. OK it wasn't strictly speaking a medical problem although I suppose that there was a loose connection. And so, hesitatingly she began.

I cannot go into the details, but suffice to say that it was a deeply personal matter that was bringing her both great joy and great sadness. What should she do? I certainly didn't have a quick fire answer and no textbook would have helped. It was just one of those situations where one felt both enormously privileged and humbled that someone should regard you worthy to pour out their hearts

As I reflect upon it I can't help but wonder whether GPs in the future will know something of the special experiences that my patients have granted me. Sharing their deep sorrow and joy and all that goes between. I'm saddened  to hear that GPs are increasingly striving to see fewer and fewer problems, regarding more and more consultations as rather trivial and somewhat beneath them. And hence the drive for 'alternative health practitioners' to take up the slack. My career would have been much the less without the many and varied 'non medical' problems brought to me. I hope I have helped in some small way.
at February 21, 2017

Email ThisBlogThis!Share to TwitterShare to FacebookShare to Pinterest
Labels: practice of medicine