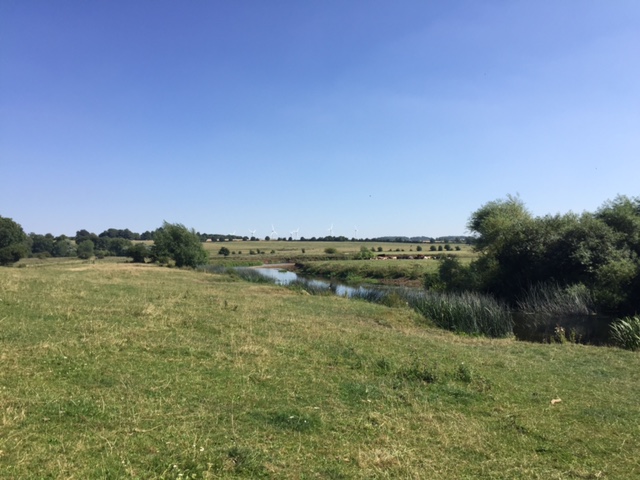 It was good to take a walk around Olney with my friend Jon the other day, he'd never been before and there was much to show him. However having previously lived near the river and the water meadows, I was keen to take him there. So we walked past the Mill House and into the fields to be greeted by one of those Constable vistas. "This would have looked the same to Cowper and Newton over 200 years ago," boasted I. "Did they have wind turbines then too?" came the reply.

Now admittedly you have to look very carefully, and probably need to zoom the picture to see the wind turbines, but they are certainly there. It seems my familiarity with the lovely pastoral scene had obscured what I happily ignored.

For the purposes of a medical report, I discovered today that I had seen one patient 36 times in the past 12 months. That's alot of contact and alot of time for familiarity to be part of the consultation. It occurs to me that if I am going to see alot of a patient it's probably worth asking an equivalent of my friend Jon to take a look every now and then. In other words get a medical or nursing colleague to take a look. They just might see the wind turbines.

On Thought for the Day recently the speaker mentioned a phrase that crops up in the Tempest, Propero is trying to help Miranda with her memory and says, 'What seeest thou else'? That is, there is more to see than you originally thought.

Jon and I continued our walk along the river as I have done many times before, walking to the Rec and then back to the surgery. He noticed how still the water was, how low the level was, how green the grass was. I just walked passed it, just enjoying being in dear old Olney by the river.

What seest thou else? It's not a bad question to ask your self at any and every time and circumstance. There's always more to appreciate in everyone and every part of life.