A tale of two books

Over the holiday period I read two books. I'm struck by the extraordinary contrast between them

One was called Gospel: Recovering the power that made Christianity Revolutionary, by J D Greear. This is a very helpful summary of what lies behind a Christian's motivation. He begins..


'I'm a professional Christian. But for many years I found Christianity to be wearisome. That's a confession you wont often hear from a pastor. But it was true of me.' 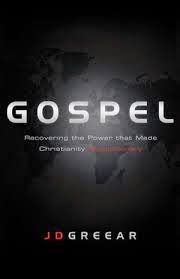 He goes on to explain that whilst he understood in theory that being a Christian was accepting God's grace of forgiveness through the merits of Christ, that's not how it felt day by day. Indeed he found his motivation for living as a Christian was more often based upon his performance and perceived spirituality, rather than reflecting upon and resting upon the perfect life and sacrifice of Christ. In short helpful chapters he focuses upon the gospel, and the implications of the gospel, as he circles round and round the vastness and sheer practicality of the gospel. As Tim Keller notes in the forward,


'It's one thing to understand the gospel but another to experience it in such a way that it fundamentally changes us and becomes the source of our identity and security. It is one thing to grasp the essence of the gospel, but quite another to think out the implications for all of life.'


'The Gospel is the announcement that God has reconciled us to himself by sending his Son to die as a substitute for our sins, and all who repent and believe have eternal life in Him. I want you to see that the gospel is not just the means by which you get into heaven, but as the driving force behind every single moment of your life. I want to help in some small way your eyes to be opened to the beauty and greatness of God',


Greear structures his book around what he calls a gospel prayer, which can usefully be said and mused upon daily. In speaking to God,.


'In Christ there is nothing I can do that you will you love me more, and nothing I have done that makes you love me less.....Your presence and approval are all I need for everlasting joy......As you have been to me so I will be to others....As I pray, I'll measure your compassion by the cross, and your power by the resurrection.


A really helpful prayer to chew over and a great book to have read at the start of the new year.

In complete contrast I also read The Mermaids Singing by Val Mcdermid. In the Spring Biddy and I are taking a short course on Female crime writers, and this is one of the set books. I generally enjoy the genre, particularly enjoying Mankell's Wallender series and Peter James 'Dead' series. However I do tend to steer clear of the especially violent, graphic and 'nasty', enjoying the police procedural detection aspect, whilst also the suspense thriller aspect. The Mermaids singing tested me! 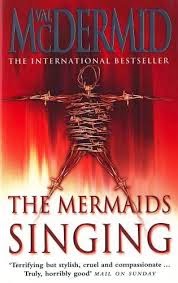 There is certainly nastiness in abundance and a fair amount of sexually graphic language. At times I wondered just how valuable it was to be reading and indeed even 'enjoying' the read. It's certainly gripping and I finished it in no time. Now I've had a chance to reflect upon the read I've wondered just how Christian believers cope who are exposed to the sheer evil that sometimes shows itself above our respectable exterior. In other words, how to forensic pathologists and psychiatrists, and murder squad detectives-who are Christian believers-reconcile their work with the encouragement to 'thinking upon lovely things' that the apostle Paul encourages? I'd love to ask them, for surely we want Christ to be honoured and 'present' in as many walks of life a spossible.

At any rate the book certainly lifts the lid on a degree of evil which many in our society would suspect is only present but not acted upon except in a tiny minority. The sexism, interpersonal conflict, petty jealousies, quickness to judge others, frustrations and more of 'normal' life are woven throughout the book and remind us all of our need saving from ourselves, even if the need appears less dramatic than that of the 'evil' character at the center of the book.