The only certainty is Christ 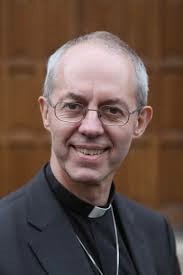 I wake early on Christmas morning, but not alas excited by opening my presents (neither of them!). In fact the computer by the bed 'accidentally' started playing some music at 5.55am. I wake with the words of Archbishop Justin Welby spinning in my head. He had been a guest on Desert Island Discs last week and I'd listened to the podcast yesterday. The words? 'The only certainty in life is Christ'.

They seem rather abstract and a tad mystical, but they were spoken in response to Kirsty Young's questions about the death of the Welby's firstborn 7 month old daughter Joanna, who had died in 1983 in a road accident. Indeed she pressed him on some of the sorrows of the day
, such as conflict, Ebola and other tragedies (I thought of the runaway bin lorry in Glasgow and the heartbreak of a family losing parents and a child at a stroke). He quietly and calmly said,


'It is a reminder of the uncertainties of life. The only certainty in life is Christ, everything else is contingent'

The only certainty is Christ. What might that mean? I guess the love of Christ is a certainty as a constant, the presence of Christ never deserts us, the future with Christ is never threatened, and so on and on and on....Indeed my reading this morning reflects upon this, Romans 8.31-39


31 What then shall we say to these things? If God is for us, who can be[h] against us? 32 He who did not spare his own Son but gave him up for us all, how will he not also with him graciously give us all things? 33 Who shall bring any charge against God's elect? It is God who justifies. 34 Who is to condemn? Christ Jesus is the one who died—more than that, who was raised—who is at the right hand of God, who indeed is interceding for us.[i]35 Who shall separate us from the love of Christ? Shall tribulation, or distress, or persecution, or famine, or nakedness, or danger, or sword? 36 As it is written,

“For your sake we are being killed all the day long;    we are regarded as sheep to be slaughtered.”
37 No, in all these things we are more than conquerors through him who loved us. 38 For I am sure that neither death nor life, nor angels nor rulers, nor things present nor things to come, nor powers, 39 nor height nor depth, nor anything else in all creation, will be able to separate us from the love of God in Christ Jesus our Lord.

As Paul Tripp comments, on these words, 'sit in front of your Christmas tree and read these words out loud so that you will remember what the Christmas story is all about.'

Email ThisBlogThis!Share to TwitterShare to FacebookShare to Pinterest
Labels: Christ

The gifts of Christmas

Great little quote from Tim Keller's Christmas sermon, 'Mary'. Keller reminds us that the coming of   Christ as a baby gives us the vulnerability that can lead to intimacy, strength in our suffering, power over our prejudices and...


'Christmas shows that God is not just concerned about our spiritual problems but physical problems too. So we can talk about redeeming people from guilt and unbelief, as well as creating safe streets and affordable housing for the poor,  in the same breath. Because Jesus himself is not just a spirit but also has a body, the gift of Christmas is a passion for justice.'

God at work in unexpected places in unsuspecting people

Reading part of Luke 2 this morning. Joseph summoned to Bethlehem by the mighty Caesar Augustus for the census-no doubt leading to greater taxation. And the inn-keeper providing a feeding trough for the one who would be the Bread of life and the Saviour of the world.

In John Stott's excellent book, Through the Bible through the year, he notes,


'Thus the emperor and the innkeeper both played their part in God's plan without knowing it. The emperor's edict brought Joseph and May to Bethlehem in fulfilment of prophecy (Mic 5.2, Matt 2.5-6). And the innkeeper, by reason of overcrowding in the town, ensured that the Saviour of the world was born appropriately not in a palace but in a stable, not in splendour but in obscurity and poverty'

'Veiled in flesh the Godhead see, hail the incarnate deity!
at December 18, 2014 No comments: Links to this post

Every now and then we learn that simple thing make a big difference. So it is encouraging to hear of an article in the Journal of the Amercian College of Cardiology with bold yet simple claims.  In a large observational study involving 55,137 adults who were followed up for 15 years, those who ran regularly reduced their risk of cardiovascular deaths by nearly one half (45%), and they had an extra three year life expectancy benefit!

What was particularly encouraging was that even fairly modest running patterns conferred significant benefits. Running relatively short distances at a fairly slow pace (6 miles per hour) for as little as 5-10 minutes per day can dramatically reduce the risk of heart disease. The key is for the running to be habitual.

Occasionally I care for  patients with terminal metastatic disease.  When a new drug is offered by the oncologist, which may confer up to three months prolongation of life, for many the opportunity is too great to resist, despite the potential for side effects and failure of efficacy. Modern medicine is tempting and vast sums of money are spent on the 'wonder drug' (three months!!). Yet here is something simple and cheap, that many (ok, not all) can realistically do; just run slowly for 10 minutes most days, and your life expectancy will be prolonged by three years.

For my Christian friends I think there is a similar logic. Maybe just 5-10 minutes spent in quiet, personal friendship with God, in prayer and Bible reading, on a regular basis, would probably dramatically alter the experience of being a Christian. Maybe forget supposedly powerful 'Christian chemotherapy', do the simple things-I'm convinced you won't be disappointed.

I'd like to acknowledge Dr Peter Savill from Medstaed for drawing my attention to the article in the American College of Cardiology  2014;64(5); 472-481, and quoted in The Practitioner December 2014.
at December 18, 2014 No comments: Links to this post