The cross and the colliery 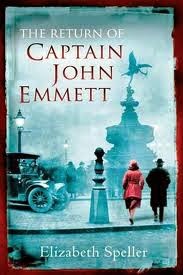 The Return of Captain John Emmett is a brilliant novel of the immediate aftermath of the Great War. It concerns the quest of Emmett's sister Mary, to discover the reasons behind his inexplicable suicide just some two years aftert the close the war. To do that she enlists the help of old friend Laurence Bartram who had come through the war himself, and who's wife Louise had died during childbirth whilst Bartam was serng at the front.

The book is a beautiful and haunting unravelling of the varied experiences of those caught up in the tragedy of war. From invalided soldiers and grieving mothers, to those still affected after taking part in the summary execution of an officer, 'for the sake of example', some three or four years earlier. At the heart of the book is an exploration of Captain Emmett's life and character, his love of poetry and his sense of humanity and justice. Mary doesn't just want to know how he died but why. What was the reason for his death?

In the Cross and the Colliery are eight short meditations on the Easter theme for Holy Week, by the then Bishop of Durham, Tom Wright,  as they were given in Easingtom parish church in County Durham. Easingtom was chosen because the community had gone through its own Calvary in1951 when 83 miners wee killed in an underground explosion. And then in 1993 when the colliery was closed and the heart was ripped out of the community. 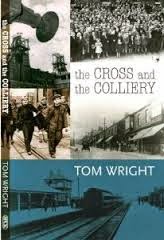 Wright skilfully blends together the 'base note' of the Old Testament with readings from Isaiah, and the 'tenor' of the New Testament with readings from John's gospel.  And then asking and challenging us to provide the alto line as a response. In his Good Friday meditation, he muses on the words of hymnwriter Augustus Toplady, Nothing in my hand I bring simply to you cross I cling


'Faced with (the staggering words of Isaiah 53) what can we say? Fortunately we have poetry such as this which have said it better than we can. We share the words and hope to grow into them. But the only proper response to the death of Jesus, wounded for our transgressions and bruised for our iniquities, is gratitude, faith and love.'


As Wright points out the whole focus  of the Bible story is the Easter event. He uses the analogy of the canoeist heading for a waterfall. To get the correct channel the canoeist must aim for the inverted V in the rushing water that can be seen on approach. Pass over at another point and the canoe goes sideways and the canoeist has a hard fall, but get the channel right and the journey continues. And so the cross and resurrection of Christ are the apex and centre of the history of the world. Respond correctly to that and our life will have meaning and purpose which sustains though life and on into eternity.

What mattered about Captain Emmett was not his poetry, war service, or means of death-seemingy shot by suicide-but the reason behind it. It's only a surprise that so much of the gospel accounts are taken up with the death of Jesus, and so much of the rest of the New Testament with the reason for his death, if we fail to see that this death gets to the core of all reality.
at April 18, 2014 No comments:

From good to great Easter song?

Always have a reverse gear

No doubt the account of the assassination of Archduke Franz Ferdinand and his wife Sophie will be told many times this year. And especially around the centenary of the event of June 28th 1914 that was to be the spark for the eventual outbreak of the Great War.

It was a remarkable series of bungles, loss of courage and a failed bomb attack that eventually resulted in the archduke's car being exactly alongside the successful assassin, Gavrilo Princip. The previous bomb attack which had wounded some of his accompanying officers, had been shrugged off by the archduke, and he pressed on with his itinerary. However as a security measure it was suggested that the route taken by his motorcade after the ceremonial formalities at City hall in Sarajevo,  should be altered from that previously published. Alas no-one told the driver.  When told of his mistake,  he braked, and because the car had no reverse gear it was slowly pushed back to enable the correct route to be taken. It was pushed just to the spot where Gavrilo Princip was waiting. After failing to disentangle his bomb, he drew his revolver instead, and shot dead Ferdinand and his wife.  And so began the sequence of events that would lead to untold misery and death for millions.

Alway have a reverse gear!

As a Christian believer there is a constant battle against the 'world the flesh and the devil'.  Sinful ways of thinking and behaving creep in so easily. Repentance is a vital spiritual skill necessary in order to maintain a healthy closeness with God.  Note these further thoughts on Psalm 51 from Whiter than the snow by Paul Tripp,


'In true repentance I confess to my selfishness. I confess that my problem isn't just that I do bad things, but that I do bad things because I'd rather have what I want than what God has willed for me...... it's not only that the battle of sin is a matter of the heart; because it's a battle of the heart, all sin is against God. Sin is rooted in worshiping the creation more than I worship the Creator. Sin is about loving myself more than I love God. Sin is about desiring to be sovereign and constructing my own kingdom rather than finding joy in the greater purposes of the kingdom of God. Sin is about forgetting God and living as if I were at the center of the universe. In my sin I exchange God's holy will for my selfish desire.'


And Cranmer collect for the second Sunday of Advent,


Merciful God, who sent thy messengers the prophets to preach repentance and prepare the way for our salvation: Give us grace to heed their warnings and forsake our sins, that we may greet with joy the coming of Jesus Christ our Redeemer; who liveth and reigneth with thee and the HolySpirit, one God, now and for ever. Amen.

"The DNA of sin is deception"

Still musing on my recent comments about Paul Flowers and his Paxman interview. And least I should appear to be rather superior to Flowers and his very muted 'confession', I come back to a quote from Paul Tripp in his excellent book, Whiter then the snow...meditations on sin and mercy in Psalm 51. Yep I sadly fall for this self deception on a regular basis, but thankfully I embrace the cure too. 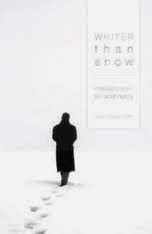 For I know my transgressions and my sin is ever before me Psalm 51.3

You'll never understand sin's sleight of hand until you acknowledge that the DNA of sin is deception. Now, what this means personally is that as sinners we are all very committed and gifted self-swindlers. I say all the time to people that no one is more influential in their own lives than they themselves are because no one talks to them more than they themselves do. We're all too skilled at looking at our own wrong and seeing good. We're all much better at seeing the sin, weakness, and failure of others than we are our own. We're all very good at being intolerant of others of the very things that we willingly tolerate in ourselves. The bottom line is that sin causes us not to hear or see ourselves with accuracy.

It means that accurate self-assessment is the product of grace. It is only in the mirror of God's Word and with the sight-giving help of the Holy Spirit that we are able to see ourselves as we actually are. In those painful moments of accurate self-sight, we may not feel as if we are being loved, but that is exactly what is happening. God, who loves us enough to sacrifice his Son for our redemption, works so that we would see ourselves clearly, so that we would not buy into the delusion of our own righteousness, and so that with a humble sense of personal need we would seek the resources of grace that can only be found in him. In this way, Psalm 51 is both the saddest and most joyous of all the psalms. It is sad that David has to confess what he must confess, but at the same time the fact that he is accurately seeing, and fully acknowledging his sin is a cause for celebration. Only Jesus can open blind eyes. Whenever a sinner accurately assesses his sin, the angels in heaven rejoice, and so should we

No-one should find pleasure in another person's wrongdoing and subsequent downfall. Or as St Paul says in his famous chapter in 1Corithians 13 verse 6,  'love...does not rejoice at wrongdoing, but rejoices with the truth'. So how to react to former Methodist minster, Paul Flowers the disgraced former non-executive chairman of the Co-op Bank, who was forced to resign after acknowledging his part in the financial difficulties of the bank, as well as admitting drug abuse and liaisons with rent boys?

In his recent interview with Jeremy Paxman recorded for Newsnight, Flowers spoke repeatedly of human frailty, and making mistakes, but when Paxman asked him if he had 'sinned', it was as if he had been asked if he'd ever walked to the South Pole on tiptoes. Why the difficulty? Flowers had been a Methodist minister for over 40 years and yet tells us that the word 'sin' is something he would scarcely use, and that he is, 'no better nor worse than anyone else'. One shudders to think what John Wesley the founder of Methodism might say. In one of his brother Charles Wesley's hymns, we are faced with a heart rending realisation of the depth of our sin,


Yet O! the chief of sinners spare,  In honour of my great High-Priest

Nor in The righteous anger swear, To exlide me from Thy people's rest

Listen from 5 minutes 10 seconds for an alternative approach.


Charles Wesley knew that when sin is confessed and sorrowed for,  forgiving grace is freely given. As the last verse in his great hymn, Jesus lover of my soul begins,


Plenteous grace with Thee is given, grace to cover all my sin