Good to pay my annual visit (assuming they may possibly want me back next year!) to Wootton Upper School and the A level ethics class of good friend Sharon Crisp. I was impressed by the maturity and interaction of the students-likely a good reflection of Sharon's teaching.

Euthanasia is of course a complex and emotive issue which continues to be in the news. Just last week we hear that Belgium has confirmed the legalising of euthanasia for children and the continued opposition to a change of law in favour of euthanasia of the Royal College of General Practitioners of which I am a member. Some 80% of members who responded to the consultation were in favour of leaving our legislation alone and not supporting any change in the law to enable physician assisted suicide.

In addition, some respondents thought that the possibility of a wrong decision being made was too high to take the risk.
The GP-patient relationship, with GPs often attending patients in the final days and hours of their lives, means that GPs would be one of the professional groups most affected by any change in the law on assisted dying.

I'm greatly relieved by that stance, which is supported by other medical royal colleges as well as the BMA.

There' so much too say on the subject, but for anyone who wants to read further I would recommend George Pitcher's book, A time to live  It is written by a Daily Telegraph journalist who is also an anglican vicar. I found it extremely helpful and with some excellent analysis of the euthanasia practice of countries like Holland, Switzerland, and the US state of Oregon. The detailed annual figures from Oregon (a requirement of the act passed in 1998) reveal some telling detail such as the rise in the number of people requesting euthanasia either for financial reasons or the 'not wanting too be a burden' which is so open to coercion.

If we'd had time I would like to have shown them this short presentation to the Oxford Union by Professor Finley, an expert palliative care physician.

Email ThisBlogThis!Share to TwitterShare to FacebookShare to Pinterest
Labels: euthanasia

James Taylor at the BBC

I was in the 6th form and had just discovered James Taylor. And here he is after all these years, in concert at the BBC 1970 vintage. There's something so appealing about simple music, when a great voice, beautiful guitar playing and superb songs all come together. There's even a song where James accompanies himself on the piano-his fingers look awkward but he still manages to make the song sound very good indeed. Enjoy, all you ageing hippies...

Sally Magnusson the daughter of former Mastermind quizmaster, Magnus, has written a very perceptive and moving memoir of her mother Mamie, and her slow descent into dementia. Entitled, Where memories go, Sally recalls the subtle indications at first, and one particular incident when she noticed her mothers ‘mislaid curiosity’. 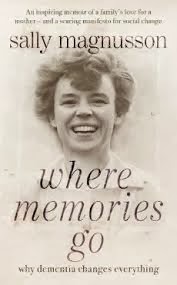 Mamie had been a lively and engaging woman, eclectic and diffuse in her interests, and always an encourager of Sally and her various projects. So when Sally excitedly told her mum about some detail of family research that she had successfully completed, she was surprised by Mamie’s slight indifference, and a simple, ‘Oh’, rather than, ‘Oh really, tell me more”, which would have been a more typical response. It was her mislaid curiosity that alerted Sally to a significant change in her mum. It proved to be one many observations that lead eventually to a diagnosis of dementia.

One of the joys of being a family doctor is the endless variety of problems one encounters on any given day. The need to understand people and their multitude differing ways of facing illness or their various forms of relationship difficulty, or the constant drain of caring for an increasingly dependant loved one, or a mix of symptoms that just does not comply with a textbook description. GPs need to be constantly curious. I guess that's another way of saying that we need to be life-long learners.

Now towards the end of my career I am glad to still be trying learn. Human beings are so complex and do not yield up their secrets easily. Even the most apparently straightforward consultation may have the potential for raising questions of will I get better? How can I cope? What about my work, my family, my lifestyle, my looks etc?

One of the best pieces of advice a good friend gave me when I got married was, to keep a sense of humour. Perhaps one of the best adages for a long career in general practice is to never mislay your curiosity.
at February 05, 2014 No comments: