A time to kill?

Stephen Grady was just 15 years old when the German army overran his village of Nieppe in Northern France in 1940. Towards the end of his life at 87 years he feels the time is right to record his wartime experience as a young teenager in the French Resistance. It is a remarkable story simply told in Gardens of Stone: My boyhood in the French Resistance by Stephen Grady. 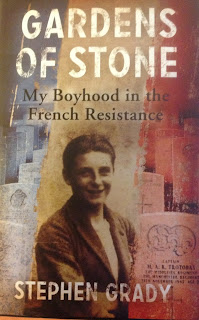 He thought nothing of cycling 60 miles (and pushing another bike!!)  to collect downed Allied airmen and deliver them in to another safe house. He endured a spell in Loos prison for defacing a downed Messerschmidt with the graffiti, Long live the English airmen who shot down this filthy Kraut! And then hanging around to collect memorabilia, only to be captured by a German patrol, and all whilst Stephen was only 15!

Truth is nearly always more powerful than fiction, and in his account of shooting a German soldier in cold blood, there is a pathos that is lost when one simply reads the statistic of the millions that died during the conflict. For various reasons,  he had been delegated to shoot a German officer who was having an affair with a French waitress. The German in question had been boasting that he  knew the names of many of the Resistance in the  local village and thus couldn't be allowed talk. And so, walking into the cafe, with Luger in pocket, Stephen shoots him.

'The German officer, is he here?' I ask with all the casualness I can muster.
'Why? What do you want with him?'
'I'm looking for work....'
The old woman narrows her eyes and sucks air through her teeth. Finally she calls out: 'Hans, there's a young man here. Say's he's looking for work.'
He is right there, just behind that wall. A man called Hans.
My mouth goes dry and my stomach lurches...a moment later, a tall fair-haired man in his early thirties appears from the kitchen, wiping his hands on a cloth.
I do my best to swallow. I was expecting him to be in the khaki uniform of the Todt organisation, with a scarlet swastika armband stretched around his bicep. Instead, he is in shirtsleeves and a pair of pleated corduroy trousers, thoroughly off duty. Perhaps he was doing the washing up.
He is a German officer I remind myself,  he has threatened to talk.
In no great hurry, Hans sits on one of the bar stools opposite me. He folds his arms.
I reach for my glass then think better of it. My hands would give me away.
He looks me up and down.
'What is it you want?' he asks in perfect French. No accent. He even smiles.
Madame retires to the kitchen.
I put my hand in my pocket.
Now. It's now.
I leap to my feet. The Luger jumps wildly in my hand as I pull the trigger, once,  twice,  at point bank range, First his chest and then just above the waist.
Hans screams in a far-off voice and glares at me, his eyes full of shock and rage.
So loud, I didn't expect the gun to be so loud.
His shirt is all messed up.
I am just standing there, holding the gun.
And then his eyes disappear into his head, and he goes down.


Later when reflecting with his older colleague, who had commended him, Stephen said,


'Thanks'. I am surprised to find that I feel no elation, no warmth in my belly at the thought of having killed a Kraut. I just feel numb and hollow inside.

The whole book is understated and fascinating as it records the conjunction of almost normal family activities, with clandestine Resistance work, and the sadness of communities punished by Nazi reprisals.

It's a very worthwhile read.