When I fall down you pick me up

Just returned from a first family holiday to the slopes of the southern French alps. I had only ever skied for a couple of hours once before, so I wasn't expecting too much of a performance. I was not disappointed!  In fact the holiday wasn't solely for the purpose of skiing , but to enjoy the opportunities of other winter sports. Our daughter Sarah had found a company called Undiscovered Alps in the Lonely Planet magazine and who put together a package of different activities to suit each family and budget. 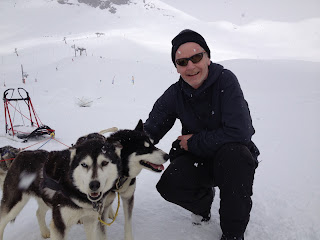 I managed to fall at least once every day of the holiday. Initially on a guided moonlit snow shoe hike in the mountains, and then when attempting Huskey dog sledding, which in turn was followed by several falls the next day for my first ski lesson. And so onto the adventure of buddy paragliding. Tomas clipped me to him and placed me on the edge of the mountain with my parallel skis facing down and told me to  'just let myself go whilst keeping upright'. Hmm. I thought that's what I had done, but within less than a second I was not airborne but instead was gracefully face first in the snow on a steep incline. Tomas managed to unclip me and he skied down to a ledge some 30 yards below me, leaving my rather awkward self to try to get down to him. After what seemed an age I finally reached him and struggled to get upright, but eventually, we made off on our flight.

The next day was another skiing lesson. Having thought I had made good progress, I seemed to forget everything I had learned the day before and managed another few increasingly painful falls. By the last day I was ready for the cross-country skiing lesson. This was even more accident prone for me and I just couldn't get it. After two falls I gave up. Although Stefan was a delightful and patient coach,  he was happy to let me try to struggle up unaided each time I fell.

So back to the lovely worship song, You are my strength when I am weak.  We sing it in a round at Grace and it sounds beautiful. One of my favourite lines is, 'When I fall down you pick me up'. And what a great comfort to know that the Christian life is not just struggling on and doing your best, rather it is putting your trust in the ultimate  guide who is amazingly patient and ready to lift us up when we fall.

In the quaint language of the King james Bible Psalm 146.8 we have, The Lord raiseth them that are bowed down. As Spurgeon comments, 'Let those who are bowed down to the ground appeal to him, and he will speedily upraise them'. Perhaps my mistake in the Alps was not to ask for help, that old dog pride kicked in and wouldn't let me go. 'Many things in life push us around, or knock us down, but God cares for us and lifts us up again. The next Psalm will say, The Lord heals  the broken hearted and binds up their wounds (Boice).

Lord lift me up.