'Once was lost but now found'

Yippee! My wallet which had been lost/stolen last weekend was returned to me today by a lady fromKempston  who had found it on the floor of Sainsburys. She didn't want to hand it in since she felt unable to trust that it really would be returned to me! Hence her welcome knock on our door this afternoon. Bless her heart. 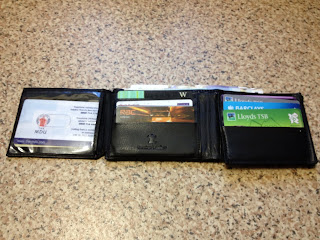 Written in 1779 by John Newton,  Amazing Grace is perhaps one of most famous hymn of all time.  The hymn tells the story of the grace of God which had reached the former slave ship captain and turned his life around. Newton acknowledged that he 'once was blind', but that now 'I see'!  Worse he was once lost, but now he is found.

Becoming a Christian is not just a matter of being convinced intellectually of the truthfulness of Christianity's claims, nor even is it taking part in religious practices. Although intellectual credibility is not absent from Christian theology, and regular religious practices can be very helpful in sustaining one's Christian life. However  the New Testament suggests that having faith in Christ necessitates an opening of the eyes, to see in this one life of Jesus Christ, the true meaning of life. To realise that in this one death the wages of sinfulness are fully paid. And to see in this one resurrection the certainty of a new heaven and a new earth beckoning beyond the grave.

To become a Christian is to be truly 'found'. It is to realise that in the midst of a happy healthy life and close relationships, one can still be truly lost. There can be a sensed lostness which nags away at us in times of solitude or sadness. There comes a realisation that it is possible to gain the whole world and still lose our soul.

Amazing grace how sweet the sound
That saved a wretch like me
I once was lost but now am found
Was blind but now I see.
at November 29, 2012