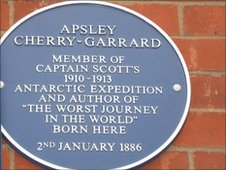 Walking into Bedford this morning I was delighted and surprised to see a blue plaque at number 15 Lansdowne Road, recalling the birthplace of Aspley Cherry-Gerard, the antarctic explorer. He had been part of Scott's ill-fated Terra Nova expedition and had been one of those who had found the dead bodes of Scott, Wilson and Bowers. They had found them November 12th 1912,  exactly 100 years ago this week.

Scott and his four man team had set out on their final push for the South Pole January 4th 1912.  And it was April 1912 before the remaining expedition members allowed themselves to conclude that there was no prospect of Scott and his team returning alive. With the Antarctic winter upon them, it was not until October 1912 that a team including Cherry-Gerard searched for the Scott team to discover their fate. They found the frozen bodies of Scott, Bowers and Wilson along with their diaries, records and geological specimens. Cherry-Gerard was deeply affected by the find and in many ways never got over it.

Cherry-Gerard safely retuned to England where he developed a depressive illness that he never fully recovered from. It's likely that he suffered what we now know as Post-Traumatic Stress Disorder. He was able to write, 'The worst journey in the world', a book which recounted his extraordinary and almost fatal trip with Bowers and Wilson to Cape Crozier to secure an unhatched Emperor Penguin egg. He married in 1939 and died in 1959. It is said that he chose not to have any children for fear of passing on mental illness to them.

Bedford gets fairly short shrift from the likes of Lonely Planet and the Rough Guides, but it's good to know that it has an association with that most iconic event in British history, the tragic 'race' to the South Pole of 1912.