What's the fuss about forgiveness? 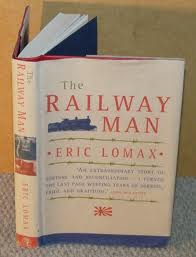 Eric Lomax died this week at the age of 93 years. He was the author of The Railway Man. It's some years since I read his story of reconciliation and forgiveness, but the touching account of his meeting up with his former guard and tormentor, has remained with me.

Like my uncle Alf who was imprisoned by the Japanese and made to work on the Burma railway, Eric had been captured in 1942. Unlike my uncle, Eric Lomax survived, despite the brutality.

The story he recounts of going back and meeting with his former captor is a powerful example of the immensity and cost and even joy, of forgiveness.

It came to my mind, since over lunch with a good friend last week, we got onto the subject of forgiveness. My friend was almost incredulous, 'Why are Christians so obsessed with forgiveness....I mean why do we need it...most of us do our best most of the time?'

Apart from denying that I was 'obsessed' with forgiveness, I too was incredulous. Surely there was a personal  awareness (at least at times), of not having lived to the highest standards, surely there was an awareness of having at times offended others, even if not God. And surely there were those moments when the sins of thought or word or deed came to mind? Apparently not to my friend!

I was reminded of some  words of an old Scottish professor and preacher, James Stewart (not the actor!!),


No cumulation of contradictory evidence seems to disturb modern man's opinion of himself...."I am not a saint, but at least I am as good as so-and-so". How that argument shrivels when Jesus comes anywhere near it! "He hath a daily beauty in his life," said Iago of Cassio in the play, "that makes me ugly"....And quoting Brunner, he goes on, 'The bad conscience is like a dog which is shut up in the cellar on account of its tiresome habit of barking, but is continually on the watch to break into the house which is barred against him, and is able to do so the moment the master's vigilance is relaxed. The bad conscience is always there, it is chronic'.

Philip Yancey in his wonderful book, What good is God has a different way of putting it,


'On a trip to Russia I bought one of those matryoska dolls, 'nested dolls' that break apart at the waist to reveal smaller and smaller dolls inside. The political scene was changing almost hourly in 1991 and I guessed wrong, choosing one with Mikhail Gorbachev on the outside. Twist the doll apart and inside you have Boris Yeltsin (who soon replaced Gorbachev in the prime position). Twist apart Yeltsin and you uncover other dolls of decreasing size; Khrushchev, Stalin, Lenin. It occurred to me later that each one of us, like the nested dolls, contains multiple selves, making us a mysterious combination oif good and evil, wisdom and folly, reason and instinct.'

There's nothing easy about forgiveness, there's always a cost to be borne. How amazing that in the good news about Jesus Christ, in his dying and rising, God comes to us with such generosity and his offer of forgivness. As Professor Stewart says, 'It is an incomparable experience to be forgiven'. More on this tomorrow.
at October 13, 2012