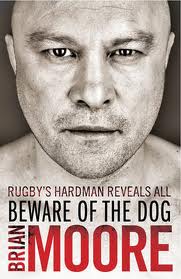 Brian Moore's remarkable autobiography does indeed 'hit you like a sledgehammer' (Rugby World). He is brutally honest both with and about himself.  Although much of his adult life has been in the physically brutal world of top class rugby, the real brutality of the book is the stark telling of the sexual  abuse he suffered by a family friend and its ongoing consequences. Add to that coming to terms with being adopted,  and his anger which is never far below he surface, and then the sudden emptiness of his life after a stellar international rugby career, and his perhaps almost inevitable, marital failures. It is a salutary read, but a fascinating story.

Moore's recurrent self-loathing and self criticism (his Gollum figure) is painful to read, although I suspect many of us experience something similar, but perhaps without Moore's intensity. A large amount at the core of the book is a description of his playing career. There are great little cameos of many of the international players with whom he played. One  striking opponent was  Johan Le Roux, the Tansvaal prop. After describing Le Roux biting a chunk form the ear of England full back Paul Hull in the first test in and against South Africa, he goes on to describe in a somewhat understated way, the second test,

'the manic Le Roux came into their front row and throughout the game ran about the field putting his boot on any white shirt he could see. This approach and the fact that he had wild eyes and occasionally bellowed, 'l love it!' made me think that his play was not entirely normal'

Many of his descriptions of incidents during matches left me wincing and glad that I was a nancy three-quarter in the days when we didn't feel obliged to get involved in rucking, mauling and other dark arts!

His reflections about adoption are helpful and cautionary, especially as regards the merits or otherwise, of tracing birth parents. He still admits to some confusion over his own adoption, but nonetheless speaks lovingly of his adoptive parents, both of whom were Methodist lay preachers.

Retirement for top sportspeople brings a gaping hole for most. This was highlighted very recently when Piers Morgan interviewed Dame Kelly Holmes. This was no less true for Moore whose world almost fell apart when he realised he had poured all of his energy and self worth into being a hard man, super fit, and top of the tree rugby player. But he has since adapted to the wonder of fatherhood and a  career as a journalist and rugby pundit. This in addition to writing about and enjoying wine, as well as the thrill of skiing-he had not skied during his rugby paying days for fear of injury.

it was fatherhood that brought to the surface the unresolved sadness and pain of 'abandonment and abuse' Moore's words). His honesty and self-awareness are striking.

'I am constantly thinking about the conflicting issues that face me surrounding my adoption, and untruth I don't know what to do about them...either of the two issues, abandonment and abuse, would have posed more the enough problems for me. In unison they have been an ordeal, and continue to be so on an almost daily basis, even though there influence has diminished'

Interestingly he mentions that when his first autobiography came out in 1996 he had not seriously begun to face up to the effects of his abuse and adoption, and in that sense it contained truth, but not the whole truth. It's perhaps one reason why people should wait a while before writing an autobiography. It's one of the things that troubles me when I hear that a guest on Desert Island Discs is only 29 years old. 'But you haven't lived' I want to yell at the radio.  Ok so Moore's 'only' 50 years old-I think I'll concede that the beginning of the understanding of  life may begin at about that age!