Just enjoyed an excellent biography of John Hunter (1728-1793). A Lanarkshire man from humble beginnings, who in many ways was the father of modern surgery. He was a remarkable man with a phenomenal capacity for hard work and application to his pursuit of knowledge-particularly with reference to the anatomy and physiology of the human body. 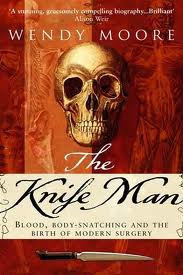 However his interests reached beyond human biology and spanned a vast range of subjects, including the anatomy of giraffes, fish and silkworms as well as the study of fossils. Working in the mid-18th century, it's hard to imagine what it must have been like performing post-mortems ( a practice very much pioneered by Hunter) in the summer, with no refrigeration, and even on the bodies of former friends and colleagues!

As a doctor it's humbling to realise just how dedicated and courageous-if not reckless (Hunter inoculated himself with gonorrhoea so that he could trace it's effects on his own body!!), our forebears were in their pursuit of knowledge. Hunter meticulously dissected and studied anatomy, which subsequently informed his surgery. He was not one simply to accept previous ways of doing things (or not doing things, as is the case in the fascinating opening chapter in which Hunter's operation upon a popliteal aneurysm proved successful and was based upon his applied anatomical knowledge).

However he was not foolhardy and knew when not to operate,


Hunter's profound awe at the beauty of  human anatomy, coupled with his deep respect for the healing powers of nature, had of course taught him chiefly that surgery should only ever be considered as a last resort. 'Operations should never be introduced but in cases of absolute necessity', he explained in a contemporary magazine.

I'm not a surgeon, but how valuable the advice to know when not to intervene, especially when so many of our patients suffer consequences more from their treatment than the disease one is trying to treat or prevent.

The chapter headings themselves are fascinating, from  The Chimney Sweep's teeth, to The Chaplain's neck and The Professors testicle, there is so much of interest.

It really does help our practice of medicine to have a historical perspective. Most of us as doctors recall teachers who inculcated in us attitudes and practises which we have developed and modified throughout our own careers.  And sometimes deciding that a way of doctoring which we have observed is not what we wish for emulate is as helpful as a more positive example. By broadening the influences upon us throughout our career, it enables a more rounded doctor to surface as the years go by. Even though I'm not a surgeon I found so much here to challenge and inspire. A lengthy book and at times the detail was a little forbidding, but I persevered and I don't think you'd regret the time invested in reading it.