It's all about you 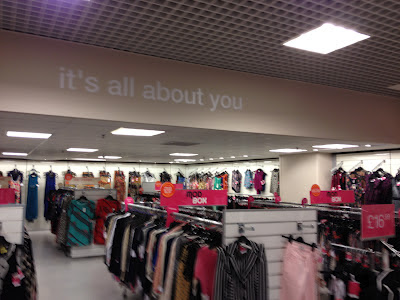 On a rare visit to T K Max (!) I was greeted with the sign. I guess that sums up life for many of us, for self centredness has never had it so good. That's just so much to do for yourself, from spa days, to chocolates, to another pair of shoes, to a new car. But what a small world it turns out to be.
Last  Sunday I was speaking in my home church from 2 Timothy 4.6-8.  As St Paul contemplates his likely execution, he passes on strong words to his young son in the faith, Timothy. Paul reviews his life in which he uses athletic metaphors about having been involved in a great contest,  finishing the race, and keeping the faith-as though he were holding tight onto the baton beforee passing it on. For Paul the Christian life was anything but cosy and parochial. It was to be centred upon Jesus Christ and his vast significance for our world.
I tried to explain that we were made for more than just the love of friends and family and the stuff we acquire. Indeed I played a clip of the beautiful song of a blackbird. Lovely though it is, it is simply a call of love for a mate, and a declaration to rival suitors that 'this is my territory'. Now that summary of life  may be ok for a blackbird, but we were made for higher and grander things.

To follow Christ is to be involved in the noblest of all lives. It is to move the focus of one's life from merely self-absorption to a placing of God at the centre. We all have moments of transcendence when we feel instinctively that there is more to life than just physicality, perhaps when seeing a child born, or being present at the death of a loved one, or gazing out at the ocean. C. S Lewis (in his sermon, The weight of glory) refers to theses moments as 'longings'. It's a long quote, but well worth the effort,

In speaking of this desire for our own far- off country, which we find in ourselves even now, I feel a certain shyness. I am almost committing an indecency. I am trying to rip open the inconsolable secret in each one of you—the secret which hurts so much that you take your revenge on it by calling it names like Nostalgia and Romanticism and Adolescence; the secret also which pierces with such sweetness that when, in very intimate conversation, the mention of it becomes imminent, we grow awkward and affect to laugh at ourselves; the secret we cannot hide and cannot tell, though we desire to do both. We cannot tell it because it is a desire for something that has never actually appeared in our experience. We cannot hide it because our experience is constantly suggesting it, and we betray ourselves like lovers at the mention of a name. Our commonest expedient is to call it beauty and behave as if that had settled the matter. Wordsworth’s expedient was to identify it with certain moments in his own past. But all this is a cheat. If Wordsworth had gone back to those moments in the past, he would not have found the thing itself, but only the reminder of it; what he remembered would turn out to be itself a remembering. The books or the music in which we thought the beauty was located will betray us if we trust to them; it was not in them, it only came through them, and what came through them was longing. These things—the beauty, the memory of our own past—are good images of what we really desire; but if they are mistaken for the thing itself they turn into dumb idols, breaking the hearts of their worshippers. For they are not the thing itself; they are only the scent of a flower we have not found, the echo of a tune we have not heard, news from a country we have never yet visited.