"You can't play pooh sticks on your own" 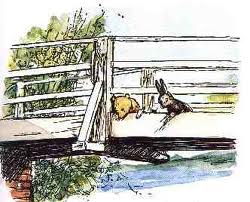 Today a lively 84 year old tells me that last year he climbed Kilamanjiro. This he did in memory of his wife who had died and to raise money for a dementia charity.

Still lively, he tells me of a recent walk over some water meadows near Olney and to a bridge over the river. Whilst loitering there he contemplated playing pooh sticks but decided that it's not much fun on your own. Fortunately just as he was about to give up a nun passed by. '"Do you fancy a game of pooh sticks", my rather precocious patients asks her. "Oh yes that would be great fun".  And so they played.

What on earth are elderly people doing playing pooh sticks?

As George pointed out, 'it's no fun playing on your own'

And so I recall the handful of patients I saw today whose fundamental problem is loneliness.  With increasing relationship and marital breakdown, loneliness is a fact of life for many people. There's much evidence to suggest that loneliness is associated with poor health and negative health outcomes. I'm not sure how to legislate against it, but it reminds me that there is yet another question to ask the patient whose non specific symptoms baffle me. "Would you say that you are lonely?"

I think if asked with sufficient care and timing and with a suitable silence after asking, it may open up possibilities of practical help and advice.
at January 23, 2012

Email ThisBlogThis!Share to TwitterShare to FacebookShare to Pinterest
Labels: loneliness