Almost exactly one year ago we had a re-union of my former medical school colleagues. We had all begun in 1975 qualifying in 1978. I'm not entirely sure of the significance of a 33 year re-union, but I'm really glad it happened. I've only just got round to adding a before and after photo!

It was a surreal evening of multiple conversations and re-introductions. I think most of us had been a little anxious at the prospect of what 33 years may have done to our memories (and of course our physiques!), but it really didn't seem to matter. It was just delightful.

Sadly neither the medical school nor it's buildings remain in their former state,  the school has been incorporated into Imperial College and the buildings are now luxury flats. So all that's left is us and I suspect some of our teachers, the most inspirational of whom is Harold Ellis-still teaching anatomy at 84 years!


Pretty much without exception everyone I chatted to was still enjoying being a doctor. It did make me realise how lucky we all are, still enjoying the same job that we have done for 33 years. There had been remarkably little change in  personality, appearance or self-confidence although for me personally I felt a strange reversion to my somewhat reticent self. I preferred to spend the evening listening to others' stories rather than taking the floor myself. 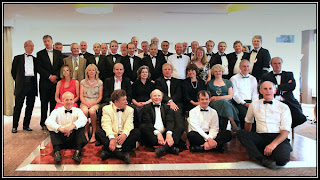 There was an excellent turnout and about 55 of us out of 75 showed up. Made me realise how fortunate we were to be part of a small medical school unlike the huge numbers per year in modern schools. It was just such fun. Especially fascinating hearing the stories of Vaughan Nicholls, a GP in a largely native and poor community in Saskatchewan who whilst still single has over the last 25 years adopted about 10 lads  from the  local community, all of whom have been in trouble with the law and have had difficult upbringings. Amazing
at June 30, 2011