You may know more than you think! 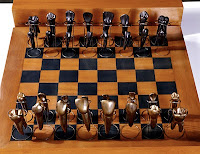 It's a horrible dream-the one where you are about to enter an exam and you know that you have not prepared well enough. Alas sometimes it proves not to have been a dream!!

A much more exhilarating experience is the opposite one of actually knowing more than we thought we did-alas a much less frequent experience.

You probably know more of the Bible than you realise. So many phrases in modern English usage come from the Bible. "Lick the dust', 'the powers that be', 'a den of thieves' or 'an eye for an eye', are just some of the three hundred or so phrases (according to David Crystal in his book Begat) which come to us from the Bible, and from the King James Bible in particular. This year marks the 400th anniversary of the translation  of the Bible which has had a huge impact upon world culture. There are better and more understandable translations now, but the majesty and beauty of the King James version remains.

'An eye for an eye and a tooth for a tooth', perhaps sounds barbaric and vindictive. But in it's original context in the Old Testament it was given to the judges to enable them to make good and wise decisions about the application of justice. So if a man was judged for giving another man a black eye, the worst that could be done to the perpetrator would be a black eye! In other words this law was given to control the urge for revenge-which always wants to go further and inflict even greater pain.

At my church we are looking at a number of this famous phrases each Sunday evening-come along if you're in the Bedford are. Last Sunday our assistant minister Martin Salter gave an excellent short talk on 'an eye for eye'-take a listen (it comes after a short talk on the Bible translator John Wcliffe at about the 17.30 minute mark).
at January 13, 2011