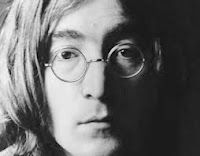 Thirty years ago today John Lennon was shot dead outside of his New York apartment in the Dakota building.

Being a boomer baby I grew up with his music, and the Beatles are still a staple for me to enjoy and listen to. John Lennon was in many ways a genius with enormous artistic talent. Perhaps his most famous composition is Imagine. And yet like much aspirational poetry I'm not sure how well the lyrics stand up to scrutiny.


Haunting and beautiful in their way, but the lyrics lead us nowhere. The implications are that there is some utopian world which exists only whilst we are alive on earth and which is spoiled by religion and rescued only by a brotherhood of man. But even in his own life there was no real brotherhood of man, with tensions especially between him and Paul McCartney.

OK 'religion' screws alot of people up. But I would want to argue that Christianity should be distinguised from religion. The essence of religion is a code of behaviour required of the adherent to appease a god or  in some way merit divine favour. The sheer relief of the Christian gospel is that in its essence it is good news of what God has done for us (not what we do for him) in sending his only Son to die in our place and bear the judgement that our sins deserve.  So the Christian life is one of gratitude, not 'trying to be good'.

Check out this site to explore Christianity further. Use the zoom button to make the text easier to read-and make sure it's full screen-it's worth the effort!
at December 08, 2010

Email ThisBlogThis!Share to TwitterShare to FacebookShare to Pinterest
Labels: John Lennon, the gospel