The old ones are the best

I seem to be following a theme this week of appreciating the 'old ways'. It's not so much that progress is inherently bad, but that with each development and modernisation something is lost. 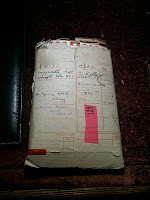 I thought about that this week when one of my patients made reference to another who lives in the same community where I work. Were the two related? What was the connection? One of the great benefits of the old 'Lloyd-George' notes (which were first introduced into this country around in 1911 during the pioneering Liberal government and its introduction of a National Insurance Act, a kind of precursor of the NHS) was that names on the outside of the notes were hand written and would show the original surname of married women (and indeed sometime multiple surnames!!), which often enabled me to make a quick connection between two patients  for whom a link had not previously formed in my mind. It would often prove a great help.

Similarly a millisecond look at the thickness of the overflowing notes immediately conveyed an intimation that here was a patient with much medical history-or contra-wise here was someone who virtually never attended the doctor whose complaint perhaps merited particular attention.

Something I really miss is looking at the handwriting of the previous GPs and admiring the hastily drawn anatomical sketches to summarise the local of the patients pain. Somehow a few words of fountain pen written prose seem to convey so much more that  misspelt computer entries. I think my last Lloyd-George entry was about 2002-in Olney we hung on as long as we could-and I bemoan its passing.
at September 16, 2010