Don't panic this isn't an essay on hyperthyroidism. OK so Robert Graves 1796-1853 the Irish surgeon did first describe a case of goitre with exopthalmos in 1835 and subsequently bequeathed his name to the condition associated with an overactive thyroid.  Like his fellow Irish medical colleague Abraham Colles (1773-1843), after whom the wrist fracture is named, he was buried in Mount Jerome Cemetery in Dublin. I've never been there but I did visit Highgate Cemetery in London last weekend. 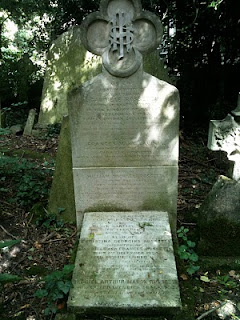 I'd intended to visit it since 1975 when as a student I lived in Highgate for a year-but never got round to it. Karl Marx is said to be the most famous inmate and author Beryl Bainbridge was buried there just last month, and in between there are thousands of the great and good and unknown. Some people might perhaps find guided tours of a cemetery rather morbid but it proved to be anything but, especially because of an real enthusiast who was our guide.

And why should doctors visit cemeteries? I hesitate to repeat the old aphorism about us burying our mistakes, but there is something salutary about realising the inevitability of death and the multiple stories that lie behind each name on a gravestone. And it  was pointed our many times by our guide was how seldom the graves are visited by relatives to tend to them.

As a GP in a small market town I have walked around the rather beautiful little cemetery of Olney a few times. I am transported back over the nearly 30 years of my practice as I read name after name of former patients. Their stories flashing into  my mind. Its a sort of post mortum ward round!

With many GPs working in a sessional capacityin differing practices and many not living in or anywhere near their patch, such experiences of walking round a local cemetery seeing name after name of former patients with which they are familiar will become a rarity. It's just one more nail,in the coffin (woops, sorry) of traditional family medicine which I regret.
at September 01, 2010