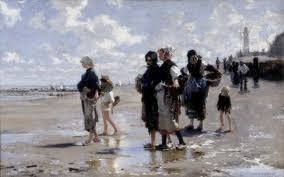 I've had a slow burning interest in art since taking a course in Art Appreciation in my final year of sixth form (whilst otherwise wading though A level Biology, Chemistry and Physics).

About 3 years ago I did an evening class in A level Art-but didn't take the exam (coward that I am!!) which opened my eyes to the history of architecture and sculpture amongst other things.

I'm 57 years old and feel that I must have lead a sheltered life. There is just so much to admire and enjoy. Of course not everything described as 'art' is beautiful (I seem to recall from the evening class the difficulty of defining it), but thank God there is so much that I would describe as beautiful and even awe inspiring.

As part of my new found artiness I recenlty joined the Royal Academy as a friend. So today I went with my wife Liz to the current exhibition Sargent and Sea.  It was lovely.  I just don't get how artists do it. Just look at the swell in this picture. 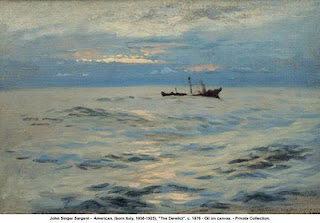 Email ThisBlogThis!Share to TwitterShare to FacebookShare to Pinterest
Labels: art

I will have mentioned The Valley of Vision before. A quite lovely collection of Puritan prayers compiled by Arnold Bennett in the 1970s. He was an Anglican clerygyman who retired to live in Clapham near to Bedford where I live and in 1988 I visited him one afternoon. We had a lovely time discussing books and the Christian life. He subsequently wrote a charming letter to me which I keep in my copy of his book.

The Valley of Vision has known a real resurgence in recent years and according to some comments at another blog has sold over 200,000 copies in the USA alone.

This morning I read his prayer on The Gospel. It closes with these words,

Your Son is our only refuge, foundation,hope, confidence;
We depend upon His death,
rest in his righteousness
desire to bear his image;
May his glory fill our minds,
his love reign in our affections,
his cross inflame us with ardour.
Let us as Christians fill our various situations in life,
escape the snares to which they expose us
discharge the duties that arise from our circumstances
enjoy with moderation their advantages
improve with diligence their usefulness
And may every plave and company we are in be benefited by us.

Walking round the neighbourhood 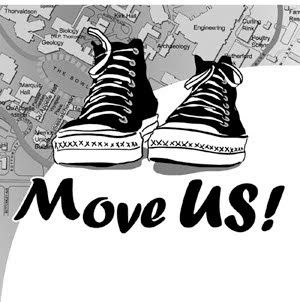 I only live a 20 minute walk from the town centre but more often than not take the car-usually justified by the need to carry shopping home. But I'm that the other day I walked.

Coming back along the close where I live I saw one of my near neighbours in his garden. I stopped and chatted and he told me that a very close friend of his young son had been killed in a road accident just days before.  It was a terrible blow for this young lad and of course for the family of the dear girl who had so tragically been killed.

Amongst other thoughts that struck me as I walked the few years to my own house was the fact that I would have probably never heard about this sad news had I not walked past  my neighbour's house. And more than that I wouldn't have able to share in some small way in the grief of this family.


Neighbourliness is underrated as contributing to our health and well-being and in turn is reduced by our dependance upon cars and the short dash from our front doors to our car doors, which provides no opportunity for interaction with others.

With growing concern over the fate of the planet, here's another reason to try to reduce car journeys. Walking around your neighbourhood increases community which in turn contributes to well being. I guess that's what adds to benefit dog walking. It's not rocket science. Those feet wee indeed made for walking.
at August 18, 2010 No comments:

How I miss paper notes. Although computerised record keeping has many advantages, how I miss the ability to skim quickly through the notes. If well kept (ok not always the case)-so much information could be gleaned so quickly. But another disadvantage is the habit of spending as much time looking at the computer as looking at the patient.

Where you look when seeing a patient really does matter. A rather jovial patient of mine asked me to look at a skin lesion just beneath her axilla last week. After satisfying myself of it's benign nature I then went on to reassure her at some length. She smiled an said, "Do you realise you've been talking to my armpit for the last minute!"

Recently I saw a gentleman in his late sixties who had been vaguely off color for the past few months. Nothing all that specific, and indeed when i saw him a few months ago i wondered if depression was the problem. However I intently looked at him as his wife recounted her recent concerns. It was then that he crossed his legs.

It was as though it was in slow motion. And then I noticed the reduced facial movements, and then the fine right hand tremor. A prompt referral to the neurologist and a diagnosis I suspect forthcoming.

I was chatting with a lady the other day who is not a patient at our practice. She told me that she had phoned her surgery to ask to speak to her doctor. Not necessarily immediately, but sometime in the next day or so. Would the doctor ring her back?  My friend received a straightforward reply, 'No!' It transpired that the doctor wasn't available on the day of the request. Indeed when pressed the receptionist said that the doctor wouldn't ring back because she was 'in and out over the next few days'. And anyway 'our doctors don't ring patients back'.

Eventually my fiend was told that she could ring at 4.23pm in 4 days time and speak to 'a doctor'. There was no guarantee of which doctor it would be,  but that was the only way of 'speaking to the doctor'.

I despaired when I heard this. Why make it so difficult to access the doctor?  There are multiple things that patients may want to chat about over the phone. I returned about  20 phone calls to patients today. Some were anxious about symptoms so I have squeezed them into surgeries in the next few days. Some wanted to discuss blood results, some wanted clarification about medication  and there were various other queries. OK I had a busy day, taking these phone calls as well as doing surgeries and reading/writing letters and doing other paperwork, but it was good to provide a service.

Us doctors really should put ourselves in our patient's position sometimes and realise how frustrating some of our behaviour is. With the Daily Mail on our case I fear we only have ourselves to blame. Of course some patients will abuse open accessibility, but even then it shouldn't be impossible to discuss it and come to a compromise. I fear that constantly moaning about the conduct of patients blinds us to our own deficiencies. It's good to talk.
at August 06, 2010 No comments:

Email ThisBlogThis!Share to TwitterShare to FacebookShare to Pinterest
Labels: medicine

First day at the coal face!

This is our youngest daughter Hannah.  Today is her first day as an A&E doctor at Bedford Hospital. Having worked for one year as a Foundation doctor she is now a 'senior' house officer.

Up until now Hannah has spent much of her time carrying out the wishes of more senior doctors. So now begins the daunting task of making her own decisions about patient's diagnoses and treatment.

I have to say I've been impressed with Hannah's commitment and conscientiousness (two words generally absent from my school reports). Old doctors like me tend to generalise about the modern young doctors and their 9-5 mentality, but Hannah has proved me wrong.

It gives me hope that if I'm spared I'll be well cared for by the medical profession in my old age. If only I could count on the NHS being preserved. I really hope so.

Email ThisBlogThis!Share to TwitterShare to FacebookShare to Pinterest
Labels: medicine

Convicted by the nails 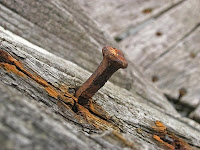 In her very helpful booklet TheWay of Jesus, Beccy Pippert quotes Martin Luther as saying, 'we carry  his nails in our pockets'. She was trying to help a friend see that all of us contributed to the death of Jesus on the cross. 'All of us are responsible for the death of the only true innocent who ever lived. It wasn't murder though, Jesus gave his life as a gift.'


I couldn't help but think of this when I was speaking to a Trading Standards Officer last week. He told me of an elderly lady who had been fleeced by some rogue traders who had charged her several thousand pounds for replacing supposedly damaged rafters in her roof. All they had done was made alot of banging noise in the loft whilst merely nailing one needless piece of wood to the old rafters. However they had been caught and punished. And the story of how they were caught was fascinating.

And so each of us played our part in the death of Jesus. It shold move us to worship. In the words of the worship song