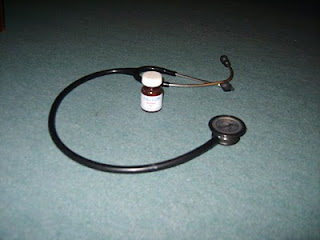 It's taken me a while but I've finally bidden farewell to my fling with homoeopathy.

Last week I took my homoeopathic textbooks and deposited them in the Olney Oxfam bookshop. I wish them well but my conscience wouldn't allow me to keep them any longer.

In the late 1980s I developed a real interest and did some formal training at the Royal London Homoeopathic Hospital just next door to Great Ormond Street Children's Hospital. I found it fascinating and intriguing since it offered such a wholistic approach to patients, treating the person and his or her peculiar mix of symptoms and traits, rather than a focus on conditions.It was pointed out however that homoeopathy in its original form is purely a system of treatment and has nothing to say about causation of disease or even diagnosis (a point not often apparent to many of its adherents who just like the sound of it's 'natural' basis).

However over the years I have accepted that there is just no evidence for it's efficacy, and that despite serious efforts to find some (see the work of Professor Edzard Ernst at Exeter   in  his Trick or treatment), it really is just a placebo effect. Largely but not entirely harmless but no more likely to help than a placebo.

I began to think that the real value of homoeopathy was in the extraordinary interest that the homoeopath takes in the patient. The minutiae of a patient's complaint and personality are all probed, almost in a pyschoanalytic way and often the patient comes away (albeit with various exotic 'tablets' such as pulsatilla and nux vomica) from the experience beginning to feel better already. "Somebody has taken me seriously, somebody understands me". It's not a bad conclusion for the patient and one that allopathic doctors (that's orthodox doctors like me) would to well to muse on.
at June 25, 2010 No comments: Links to this post

Email ThisBlogThis!Share to TwitterShare to FacebookShare to Pinterest
Labels: Homoeopathy

Don't listen to the patient!

With apologies to Sir William Osler. For it was he, who is an icon of medical education and a former Regius professor of medicine at Oxford, who coined the aphorism, 'listen to the patient, they are telling you the diagnosis'.

The aphorism is indeed incredibly useful and a reminder of just how important history taking is in the practice of medicine. With today's over reliance on high tech scanning and other tests, it is a reminder that the fundamental skill of carefully and actively listening to the patient tell their story, remains central to diagnosis.

But...patients can lead you astray. I saw this 30 year old chap yesterday. He told me that he had been doing some gardening the previous bank holiday weekend and had strained his upper back. I confess I wasn't hugely concerned and had a very cursory look at his mid-back and palpated the paraspinal muscles to elicit some tenderness. As I sat down to suggest anti-inflammatories, he pointed out just a couple of spots over his antero-lateral chest. All too slowly the penny dropped and I had a more thorough look at his back-and there they were, the tell tale clusters of papules of herpes zoster.

I couldn't believe that I had not noticed them during my first look at his upper back. But I was looking and not seeing. Already accepting his account of the explanation of his pain, and sadly not using my own judgement, I was composing a quick response whlst 'looking' and hoping to catch up in a busy clinic. Quite simply he lead me astray! 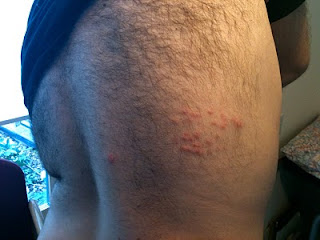