Creation evolution and all that

It's a challenging time to be a Christian. The media is dominated by views of evolution which do not only restrict themselves to explaining how species have evolved and adapted to their environment. No, evolutionists want to explain everything from an evolutionary point of view, even to answer the great philosophical questions, such as why we exist, what life is about and why human nature is what it is. Evolution (via Dawkins et al) is a 'grand theory of everything'!

But wait-Christians who love their Bible do not have to ridicule evolution. 'Belief in evolution as a biological process is not the same as belief in evolution as a world-view'Thus states Tim Keller pastor of Redeemer Presbyterian church of New York City in his very helpful article, Creation, Evolution, and Christian Laypeople. It is an extremely helpful read.

For many years I have been helped by Derek Kidner in his commentary on Genesis and some of his suggestions about Adam and Eve and how we are to understand their relationship to primitive 'humans'. Tim Keller quotes Kidner favourably and draws on some of Kidner's suggestions on how we might understand Adam and Eve and their relationship to other humans alive at the same time.

Keller is especially helpful on how we should read and interpret different part (genres) of the Bible and how there need not be conflict between science and the Bible and so still upholding a very high view of the Bible's authority. It's compelling stuff.


If you are a die hard evolutionist with lttle sympahty for Christians and their Bible, or a Christian who can scarcely bring yourself to utter the word evolution-or just plain old confused. Treat yourself to the article. You might just be surprised.
at December 30, 2009 No comments: Links to this post

Love came down at Christmas 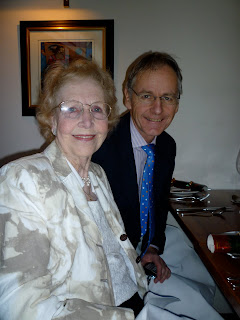 Yesterday my dear mother took our wider family out for a lovely meal at an old Georgian coaching inn (The George Hotel just a few miles north of Bedford. It was a wonderful act of generosity and we had a fabulous meal and a great time.

Mum is not wealthy but she is generous. I thank God for her.

In His coming Christ gave up all his 'wealth' in the world's greatest act of generosity.

Fall on your knees

Throughout the course of the year I see a number of patients who have fallen on their knees. Sometimes it's just a stumble through frailty or carelessness and at others it's the consequences of vigourous sport. But never is it deliberate and 'meaningful'. At Christmas I love hearing the carol O holy night with it's beautiful line, fall on your knees and before Him lowly bend in response to the Christ child.

At Christmas we are reminded that all of us are incurably worshipping creatures. Whatever we give ultimate worth and value to-it is that which we worship. It's subtle and some of us don't like to admit it but whether its family, status, comfort, independence-you name it we find things to 'take God's place'.

Join me in falling on your knees before the King of Kings, as Beccy Pippert reminds 'he is the only Lord in the universe who can control us without destroying us'. Listen to this great version and worship Christ the new born King.

As a family doctor I've become increasingly aware of the trust which patients put in all forms of screening. The oft repeated refrain of 'I'd rather catch it early' in fact betrays a lack of realisation of the limits of screening. Yet I find it so hard to explain to my patients. Such is the power of the media and the private health sector in the UK who use TV adds to imply that preventative CT scans and blood tests will inevitably lead to improved health. Yet it's so much more subtle than that.


So I was pleased to pick up this article from the US (where much of the 'preventativ' hype stems from!!). It's worth a read. And yes, discuss with the doctor the value of screening. Because some types are undoubtedly valuable, for others the jury is still out, and some are downright misleading.

Preacher with a brain tumour

LIke many Brits I sometimes struggle with American self confidence which is particularly noticeable amongst some of their preachers. Having said that my favourite preachers are all American!!

Matt Chandler is a gutsy, self confident preacher who at the age of 35 years seems to have the 'world' at his feet-a lovely young family, a thriving church and increasing invites to preach all over the place. Thus far I've struggled somewhat to value his ministry. But now (as Lloyd Jones would say..) he has a frontal lobe brain tumour. Here's his video message to his church just before the surgery. It's humbling and powerful.

Watch it and pray.